Day 40, 22 miles, near cliff spring
It’s tough to get started this morning. It’s so cold. Shoes and socks are frozen. Brrrr!!

I figure I’ll hang out with Prana and Haiku today and catch up. The navigating should be pretty straightforward, it’s just road and wash walking.

We think we have an easy day ahead of us. Hahaha. On the Hayduke? Forget it! The first part is okay but the Bull Rush gorge is a bit slower than anticipated with some muddy sections. It’s also prettier than anticipated so it’s all good. The easy road is pretty sandy and turns into a wash. 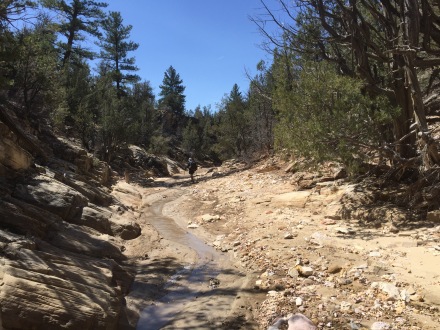 We pass by an old cowboy shack before along the way. It’s in bad shape which is too bad since the location is really cool. This whole valley is so much prettier than we had expected. Tall walls of white rock and cool formations.
The wash walking is weird. There is a crusty layer on top of soft sand and when you break through it it feels like you slide like you’re in mud but you’re not. It’s tiring walking and we’re very happy when we hit an actual solid road. And it’s really actually easy walking! Oh my! 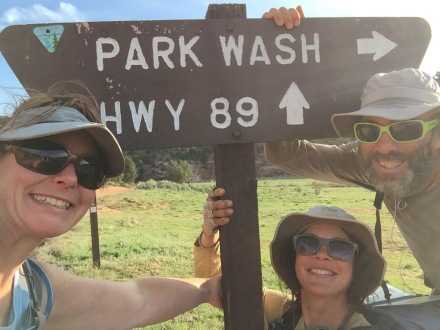 Even though the walking was slower than expected the day flies by. It’s fun catching up and cracking jokes.
Pizza! (Just ask Prana)
We set up camp on a little side road which leads to a sweet fenced spring. The water tastes delicious. There are some giant cat prints all the way to the water. Prana prefers to think they’re from a small bear as if that’s any less threatening.
Oh and Prana found a pair of Frogg Togg rain pants in the wash. The crotch is blown out but they’re still in better shape than mine and I can sew up the crotch. The trail provides once again!
I plan on leaving early tomorrow and pushing miles and they are taking their time because they’re meeting a friend who is going to hike with them for a bit so I hang out at dinner and hug them goodbye. I’m so happy I caught them! It was so much fun catching up and seeing where we all were with bad weather. Our favorite sunrise was the same one they were only a few miles ahead then. And they saw the same rainbow except they saw it near Stevens arch and I saw it after Coyote Gulch. Their photo is stellar. Oh and neither of us liked Rogers canyon lol!