I started actively red lining the trails of the White Mountains last year, meaning I’m trying to cover all the trails described in the AMC White Mountain Guide. I’ve hiked many miles in years past but never really kept track all that much. Once I downloaded the ‘worksheets’ with all the trails and started checking them off I realized I hadn’t hiked as many as I thought. I wasn’t even half way done! Since then it’s been a fun game to string some trails together, preferably in a loop minimizing retracing trails I’ve already done.

This Saturday I had a craft fair which ended at 2 pm so that meant I couldn’t get to the mountains until late afternoon. But looking at my maps I found the Copper Mine trail which was only 2.5 miles long and had a shelter at the end. Perfect! It was an easy hike on the west side of Kinsman ridge and I made it to the shelter just before dark. The next morning I took the time to explore the falls nearby. A little scramble got me to the bottom of the upper falls to a nice swimming hole. This would make a great destination in the summer. 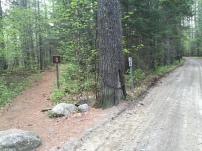 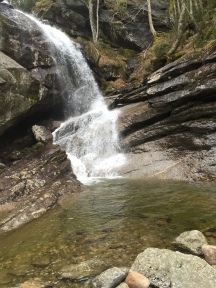 The hike down was quick and I soon found myself getting ready for my next hike. I wanted to hike the Reel Brook and Mt Kinsman trails but instead of doing two out and backs I figured I could make a loop out of it by connecting them with the Kinsman ridge trail. Only problem was that I would end up at different trail heads. Since I didn’t have a car spot I thought I could bike from one trailhead to the next. That sounded a lot easier than it was! I haven’t biked in several months and there were a few small up hill sections. I soon found myself panting and sweating, this is harder than the hiking, haha. The dirt road to the Reel Brook trail turned out a bit too much for me and at some point walking my bike made more sense. I was relieved when I got to the trailhead about a half an hour later and parked my bike behind a tree.

There were three other hikers starting at the same time but they were planning on going towards Kinsman Notch and I soon passed them anyway. The Reel Brook Trail was nice and gradual, a bit muddy at times but otherwise pretty sweet and I reached the Kinsman ridge trail pretty quickly.

I wanted to scout out the Eliza Brook shelter for a future trip and I was pleasantly surprised, it was in great shape with several campsites and a bear box. After perusing the shelter log book and eating an early lunch I continued on to South Kinsman. That was a tough climb but I had some company of a dad with his daughter and her friend. The views from the Kinsmans were pretty impressive. We could see rain coming in from the distance and an impressive cloudy sky. A little further along there was even some hail just as another hiker asked me to take a picture of him at a view point. I asked him to return the favor and ended up with a picture of me in my summer dress trying to catch hail! It got even better when mother nature decided to throw in some thunder and lightning! I was happy to reach the Mt Kinsman trail to head down from the ridge to safety. 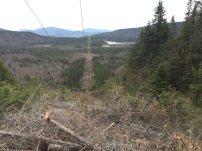 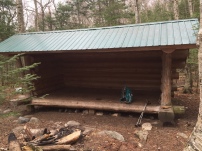 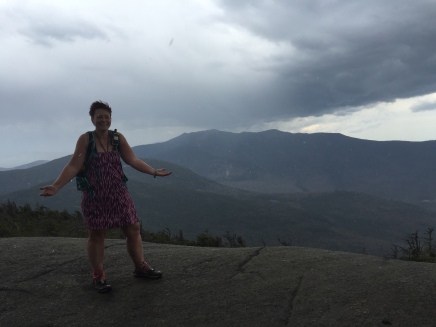 This trail had a few patches of ice left but it was mostly avoidable. It seems like the ice is finally disappearing from the Whites, this makes me very happy. And seeing all the trees leafing out is wonderful too. It’s finally starting to look like spring! I reached the Bald peak spur trail and .2 miles later had another sweet view. Not much later I took the short spur trail to a flume gorge. It was pretty impressive. Back on the main trail I made good time once the tread mellowed out some more and I enjoyed the green tunnel. 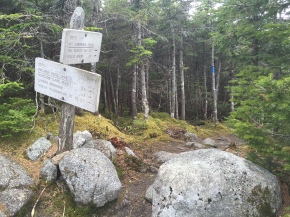 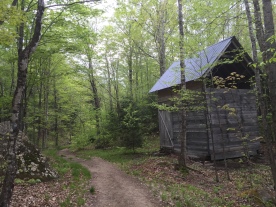 It was only 5pm when I got back to the truck and I figured I could do another short hike. After picking up my bike at the Reel Brook trailhead I headed over to the Jericho Road trail, except that I couldn’t find it and continued on to find the Cobble Hill trail instead. This turned out to be rather boring walk on an old muddy dirt road with a seemingly random turn around at the national forest boundary. Oh well, it’s another red line I can check off my list and in the end I saw a tiny little eft which was cool. 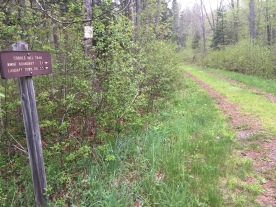 2 thoughts on “Some redlining in the White Mountains”