Peak Above the Nubble

Greenleaf’s (my husband) goal this winter is to finish climbing all the 100 highest peaks of New England. And I thought it could be fun to tag along and do the ones I still need to finish my list as well. I don’t have the desire to finish them all in the winter so I’m leaving some tough ones for the summer. Some of the peaks left require a bushwhack to the summit and today’s peak, the Peak above the Nubble is one of them. I have bushwhacked before but not in New England and it never looked all that appealing to me. Some of the brush can be very thick here.

We found a few trip reports online and I saved a screen shot of a GPS track on my phone. Greenleaf was carrying his GPS with the coordinates of the peak and we had maps so off we went. We parked the car on the side of the road and had to walk the forest service road until we saw a few big boulders of to the right marking a closed off logging road.

We turned right and continued until we saw some sand hills on the left, this was mentioned in one of the trip reports as the spot to leave the track and turn right onto a faint overgrown logging road. Just a few yards later we saw the turn and proceeded up hill. There was somewhat of a path to follow and every once in a while we saw a ribbon. We entered a clear cut area with tall saplings with just about enough room for us to pass through, we had to reconfigure the way we had attached our snowhoes because they were catching on the twigs. 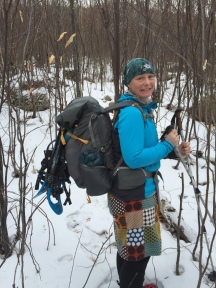 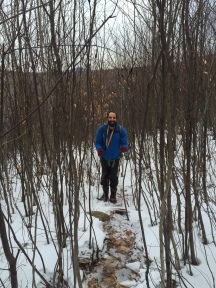 After this section we entered the woods again and followed a bearing towards the peak. We’d been warned not to head straight for the ridge because the woods get very thick there so we stayed on a diagonal going up gradually. 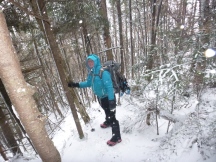 We eventually did end up in some thick spruce and balsam fir and forced ourselves through. Branches were hitting me everywhere, I did not enjoy this part of the trip but there was no way around it. It really wasn’t all that long of a stretch but I hated it. If I had felt confident going back down by myself I might have done that. But I wasn’t, so kept following along. We were very relieved to find the herd path near the summit and the last bit was fairly easy again. We tagged the peak but didn’t linger since it was pretty chilly and windy. 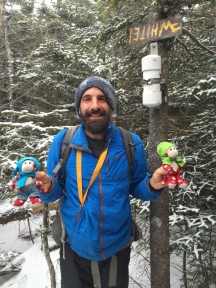 The way down was much faster, we were mostly able to follow our tracks and knowing that there was an end to spruce whacking helped tremendously. I counted myself very lucky not to have needed snowshoes because that would have made pushing through and climbing over trees a lot more complicated.

I was very relieved to get back to the road and celebrated my successful first New England with eating a bagel. I’m glad I’ll never have to do this one again. Hahaha.